This was our very first project this year. The kids arrived into the classroom and there were papers with PURPLE SPILLS all over them on their desks! What happened? There was only one explanation. Penelope the snake had gotten loose and dragged her tail in the wet paint and made a mess (at least that the story for the younger kids). Should we throw away all this paper? Of course not! What happens when you make a mistake? You make into something new. That's just what these kids did. They let their imaginations run free and created something new and beautiful out of the purple spills.

This lesson has come in handy time and again as I try to teach the students to navigate through problems that arise in our art work and class. A lot of times you will hear one exclaim "it's a beautiful oops! Keep it!" Mistakes happen, a lot in life, what matters is how we react to them. I am really glad I took the time to do this even thought it wasn't one of those lessons that solved the mysteries of art or taught about a some dead artist, or integrated into every subject area... but it left a lasting impression. Even Penelope the snake (the one who spilled the paint) has become our class mascot for the little ones. I change where Penelope is each week and sometimes Penelope even has a question for them! They love to come into art and say "I found Penelope!"

How do you teach your kids to cope with mistakes in the art room? 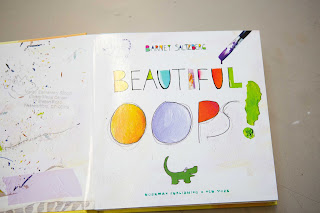 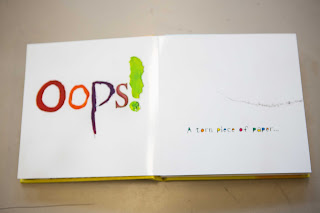 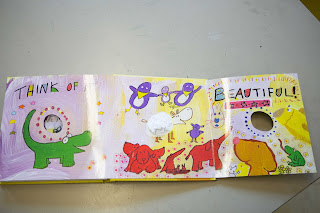 So I have a new teaching position! Yay! But I've been super, crazy busy (to be expected) and haven't posted. I want to share with you some fun stuff happening in the "new" art classroom.

I challenged the 5th graders to make an animation with an everyday objects. I hardly had to teach the app which was hilarious because it took me a good 20 minutes to figure it out. Apparently mother's now have iPads in the womb.  I thought I was super tech savy and fast. . . until a ten year old sat at my computer and basically set the keys on fire with the speed at which he typed. So I decided not to waste their time as they were so pumped to work in groups and had already been planning their stories (I guess outside of class) once they heard what the next project was going to be.

This was created in less then an hour by my amazing students. But I guess that isn't entirely true because we spent the class before this creating thaumotropes, learning about the persistence of vision, and experimenting with the iPad stop animation.

I am excited to share these at our annual art show! It is going to be a lot of uploading and QR code making but the work is extremely exciting. If you have any advice on the quickest way to upload about 30 animations and create QR codes let me know in the comments!

I am all about transforming everyday objects into art! I think it is one of the highest forms of creativity to be able to look at things in a new way. I would love to here about ideas you have, art that you've done, or lessons you can share, about TRANSFORMING EVERYDAY OBJECTS INTO ART!

A friend of mine called this an Irish Goodbye, the kind of leaving where you just sneak away (usually to avoid being dragged back in for one more round:) I am saying goodbye to a place that has been life for nearly a decade.

If you are just reading my blog, you may or may not know I worked in an inner-city school for many years. When I graduated from RISD I said if I was going to work in education I was going to go to an urban district. At RISD I had worked with kids after school in South Providence and bribed them off the streets and into my art classes with prizes and candy. Most of my kids used the free stuff as an excuse to come to my classes, but I know they really came for the art. In our little safe classroom, in the public library, they brought in their film rolls and I developed them. They wrote about their life and took pictures. They let me into their homes and lives through these pictures. We studied famous photographers like Robert Frank and Lewis Hines. They took pictures of their mother under hair dryers while their sisters looked on, their rooms messy and unkept and their dogs protecting their yard from behind steel fences. Sometimes they dressed up and pretended they were someone else, somewhere else, kings, queens, ninjas and they wrote in that voice. My best friend would come to translate their stories and teach them English, patiently one kid at a time while I taught them how to develop their film.  Selfishly I thought I was "making a difference." I did this for two years. Every once in a while, a kid would stop coming and I would see them hanging on the streets with a group of kids way too old and it was like someone kicked me in the stomach.

I never really wanted to be a teacher before that, but because of them,  I decided I would only work in an urban district.

I wanted to feel like I was making a difference, again selfishly.

When I first got to my first assignment, a middle school, in the worst part of the city, I'm sure teachers put money on how many days I'd last. I walked into this middle school that was "between" principals, was given a key to the room and that was it. Literally. The key did not open the supply closet, so I ran to Walmart and bought supplies the night before (I was hired only a few days before the start of the school year). "This is exactly what I signed up for" I thought. Blonde girl in cowboy boots (before they were cool) who hadn't been to a public school in about 10 years was going to "make a difference." I had an angel step in who took me under her wing and I had the privilege of calling her my mentor (thank you Meg!) and she understood me. She let me figure it out without falling too hard. She sat at my kitchen table while I put together my teacher evaluations and went over it all line by line, lesson by lesson, SHE LET ME WATCH HER TEACH and she was amazing! That is huge! For some reason no one lets you watch them teach as a new teacher. She listened to me cry and told me to pick "one kid",  all I needed to do was make a difference to one. One, naturally turned into two, three, and I am forever grateful for her advice. For a solid two years, I came home hardly able to get the energy up to eat, fell asleep whenever I could and got up to do it all over again. No one told me about that part, the pure exhaustion, I never felt anything like that! As I got better, the job got harder, because I was no longer trying to survive, but truly teach and listen. I had a lot of successes little and big throughout the years, but none of those stories seem to matter too much.

There are so many stories I could tell about my 10 years in urban education but I need something to do when I eventually retire;);) Leaving this city is so anti climatic. I could write a story about how I turned lemons into lemonade very easily, but I don't think that would be authentic. I don't think it is any different now then before I came despite tremendous efforts by many.

So as I move onto my new position it is bitter sweet. There won't be a goodbye and it really is better that way. Kids don't remember too much and our students are transient and not used to anyone staying in one place for too long anyways. This will be harder for me then it is for them!

I am so proud to be moving to a place that will value my work, I can feel it already! I am beaming with pride to be joining this special school which is supported in their profession by administration and the community. It is full of smiles, kids who stay their whole elementary career and parents who come in to truly help (and I haven't even met the staff yet!) This week I am going to give myself permission to be excited about this amazing change by going to my new classroom and setting it up. It is with such a heavy heart that I say goodbye to this city, I have no idea what is out there, but I'm brave enough to find out! I will continue to develop lessons on this blog and let you know what ideas inspire my students. Stay tuned, because I feel like the best is yet to come!
18 comments: 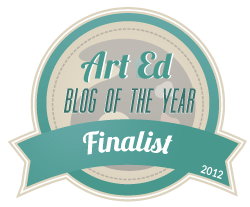